I'm glad I have to watch these shows so many times in the process of putting them online.  I'm lucky that way.  First seeing it as I transfer it in real time from tape to digital.  Then I study it a number of times in the process of editing and noting the running times, etc.  Finally, with the finished render, export, compression, and upload to the web, I check the whole show again and again.

This Episode, #29, has so many little touches that I discovered because of the repeated viewings.  If you take the time to watch it a second of third time, I bet you will find new things you missed the first time thru!

I'll give you some clues...

Find the face on the giant Alarm Clock... and it's not the one with the numbers!  Think about how hard Rebo is working in that illusion.  Remember he has gloves on!  Notice the care Mike takes as he caries the dove...  and more.  Put your discoveries in the comments below.

Later in the show Mark and Rebo do a broken and restored watch routine with a Scout from the audience.  He sure looks happy when his watch is finally returned.  But without revealing the secret, the important moment when the tricky part happens totally went past me the first time I saw it.   Now that you know, I wonder if it will fool you as strongly as it did me.

Do you think the two boys in the front row of the audience are twins?  Or just brothers?  Looks like they are dressed alike too.  I wish dad had produced a watch from each of them, but who could have known that during pre-production!

The final illusion sequence is very creative.  Putting those varied effects together into one presentation was a brilliant idea.  Each was more than a vanish and reproduction, they were transpositions with a variety of mediums, including Nani.  Pay close attention to the little boy's face when Mark hands him the Hour Glass.  His face lights up... He's excited to have that magical responsibility.  Also, check out the Dragon paint job on the "Princess of Theibes" Illusion.

As you make your discoveries, Please let me know!  Share them with the rest of the community here at the Archives.

The Allakazam Archives has digitized to preserve  Episode 29 of  The Magic Land of Allakazam! 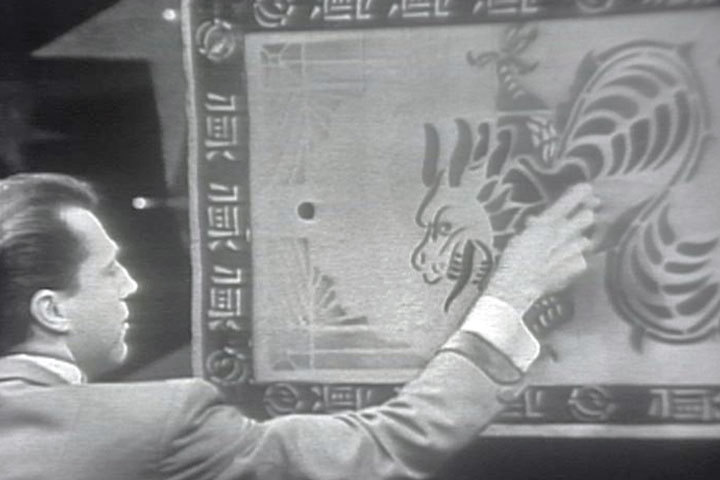